We are Not our Ancestors: in Favor of Awnings 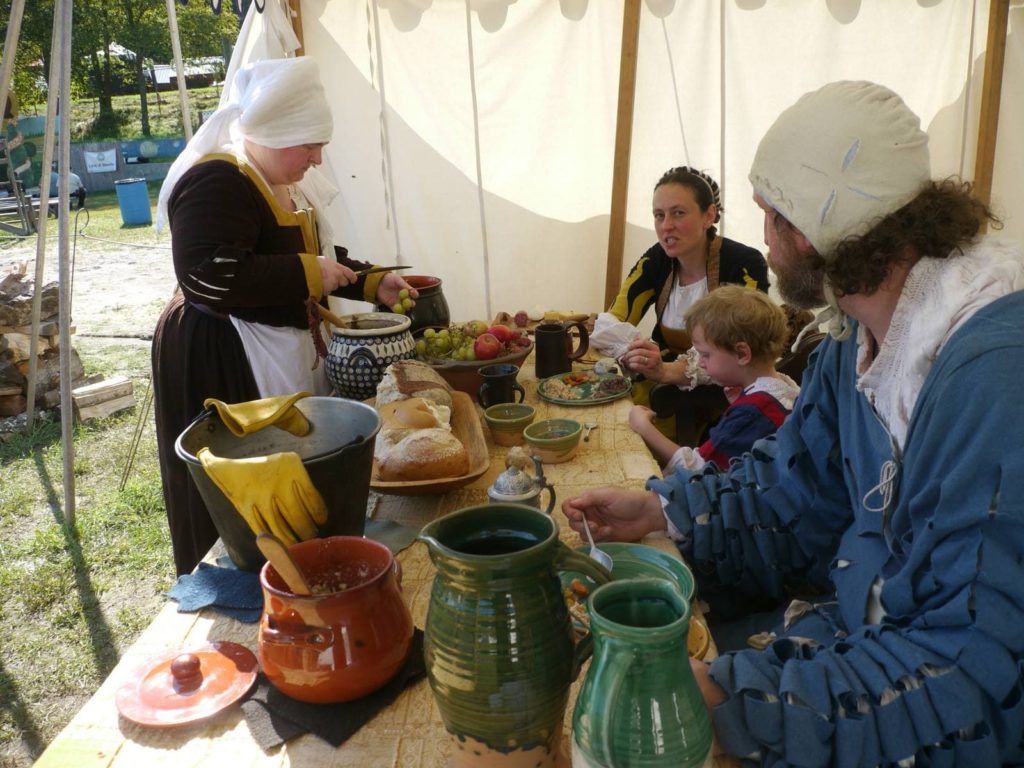 We are Not our Ancestors: in Favor of Awnings

Humans, as a species, are incredibly adaptable. That’s why we can be found on every continent; in deserts, tropics, tundra, and everything in between. We’ve adapted to nomadic life and sedentary life; to life in the wilds and in the biggest cities. In this modern day we’ve adapted to live in climate controlled rooms where we spend most of our time sitting down. This isn’t a terribly “natural” way to live, but we’ve adapted, and now find it quite comfortable. So much so that most of us enjoying this lifestyle would find it extremely uncomfortable if we were thrust back in time when chairs were not as prevalent, and most work was done outdoors. Sure, there are folks who don’t enjoy life in front of a computer screen, but it is the norm among my friends and peers. Because of this we do sometimes make compromises when it comes to our historical portrayals. As much as I wish we could do everything as accurately as possible, I am a realist, and it is not 100% possible for most of us to do so.

Most of the reenacting that the Shellenbeans do we do with Das Geld Fahnlein. In January of every year when we get together to decide what events to attend and what projects to undertake, we use two criteria: it must be educational (for ourselves or the public) and/or it must be fun. The educational part is pretty self-explanatory, but some reenactors would like to think that fun doesn’t enter into the process of deciding what sorts of reenacting to do. But here is the truth: we’re all volunteers, none of us are getting paid to dress like they’re from 16th Century Bavaria, so we would not go out and do it as many weekends as possible if we did not enjoy it. We try to be as historically accurate as we can, we’re always trying to learn more so we can be more authentic and get closer to the feel of what daily life was like for the folks we portray. But if we are miserable all the time while we do it, we’re not going to keep doing it.

When Das Geld Fahnlein started we were younger and in better shape. But even in the early years we found that the chairs in our camp were always occupied. There are some remarkable paintings of Landsknecht camps, and there are very few chairs in those scenes. We started with two or three chairs for those portraying nobility, as use of a chair was a clear sign of station in the 16th century. Those portraying soldiers or other regular folks were supposed to sit on the ground, on boxes, or maybe a bench or two. But whenever Stephen or I came back to our chairs, someone else’s butt was in it! None of our members were deliberately trying to act above their station, but most of us members of Das Geld work desk jobs during the week. Heck, we are taught all through grade school to sit in chairs for a large portion of the day. We’ve adapted to chairs, so not having enough of them around was causing physical pain that made it hard to keep going. While we try so hard to be as accurate as possible, it seemed like we were going to have to choose: be really uncomfortable for hours, cut down on the weekends we could go out, do only short reenactments, or bring in more chairs. We had a serious conversation among our members when the “chair problem” came up and decided as a group that, in this case, we would choose to deliberately be less accurate in order to accommodate modern life.

One of the other areas we’ve discussed when it comes to compromising on history is weather protection. Our ancestors spent so much more time in the sun and rain than we do now. Starting in childhood, one just got used to the direct rays of the sun. Modern folk are practically troglodytes when it comes to sunlight, we spend most of our time with walls and roofs in between us and direct rays. When doing a 16th Century event we all slather up with sunscreen, and we wear broad brimmed hats, but it is exhausting being in the sun all day when you’re not used to it. We were also finding that the public didn’t want to stick around as long if they were in direct sunlight. While there is some evidence for sun shades, tents with only roofs and no walls, or awnings off the front of tents, they are not nearly as widespread in historical settings as they are at reenactments. We have tried hard to keep the number of sun shades in our camp down, but as of our 2020 January meeting, we finally convinced Stephen that even our display area for swords, pikes, and other weapons needed a fly. Having one would also mean that we would not have to hustle all the metal implements into the back of a tent whenever a few rain drops fell from the sky, which is probably why he relented.

The point being, if you are thinking about skipping the awning when you’re ordering a tent, you may not want to skip it. If you spend your days in an office, and your evenings inside a house you should get a fly or awning for your reenactments, you will find it indispensable once you do.

For the first time in Tentsmiths' history, we're d

Our modern oilcloth is made slightly differently,

With the reenacting and outdoor living history sea

Tentsmiths has been making the highest quality historical canvas tents since 1983. Read More >>