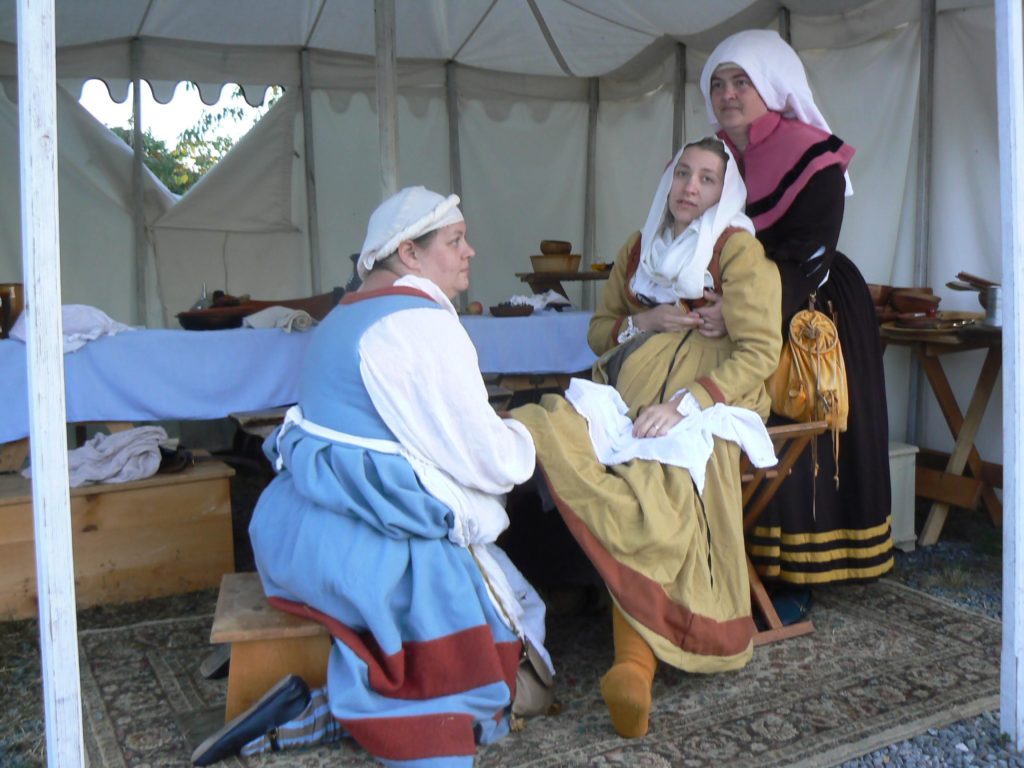 The Shellenbeans look forward to September and October every year, because that is when we get to spend time at our other home, with our other family, in the camp of Das Geld Fahnlein at the Connecticut Renaissance Faire. Many years ago Alena and Stephen met at the Vermont Renaissance Festival and have continued to be involved in New England’s small and large Faires and Festivals. Nowadays we provide the historical education part of CTRF with the Guild of Saint Morritz, where we demonstrate daily life of soldiers and their families from Bavaria in the year 1528. That’s a fancy way to say: We’re Landsknecht.

I don’t expect too many of you to be familiar with this particular slice of history, it is certainly not one widely portrayed in the United States, but I thought you might like to know how we’ve used Tentsmith tents since long before we became Tentsmiths. In 2009 a small group of us were looking for something new and interesting to do, something that was more historical than most of what goes on at a renaissance faire. We were inspired by our friends in the Guild of Saint Michael at the Bristol Renaissance Faire who managed to do history at Renaissance faires, so we thought we had a chance to do the same. Stephen had a long-standing interest in the soldiers of the Holy Roman Empire in the 16th Century, and that portrayal had two big points in its favor: first, the Landsknecht practice of bringing their women on the march provided an opportunity for the three of the 5 founders who are female to take part in almost every aspect of the group. Second, the Landsknecht are well known for their campaigns all over Europe, so we could haul tents all over New England (and beyond) and set up just about anywhere that we were welcome and find a way to justify the presence of a dozen soldiers and their families.

Fort the past 10 years Stephen has portrayed Freiheir Gustav von Reischach, captain of Das Geld Fahnlein, The Gold Company. And Alena has portrayed Frau Hanna von Reischach, captain’s wife. We have a military demonstration on the Jousting field once a day, and a talk on Renaissance Medicine in the afternoons, but mostly what we do is go through our daily tasks and talk to everyone who wants to visit. We talk about weapons while practicing and taking care of them. We talk about food and health while making meals based on historical german recipes and common foods out of ingredients that were available at the time of year and in the geographical area. We talk about gender relations, class divides, religion, hygiene, education, military life, child rearing, and just about anything else having to do with life in the early 16th Century. We have marvelous conversations with faire visitors and participants. You know, the reenactor stuff that we all know and love.

The biggest change over the past 10 years has been the introduction of kids. First we had a father with his 11 year old son join us, then two of the founding members had a kid. Not too many years later, Percy was born, followed shortly by the baby from another couple in the group, then a family joined with their 2 kids… At this point while we have 14 active adult members, we rarely have more than 7 adults on any given day at an event. We almost always have 6 to 8 kids, ranging in age from 14 down to 1 year old this year. We’ve taken to telling people that there is a natural consequence when you put women with soldiers. All those kids certainly make the camp seem even more real, kids aren’t faking it when they’re chasing each other around, and mothers are yelling at them to slow down around the fire or go dig somewhere else. When you are invited in to a camp by a 4 year old it is a sincere invitation, and you also can’t very well say no.

Where do all the tents come in to it? Well, the Captain’s tent is an impressively large Round End Marquee where we show off rugs, rope beds, break-down tables, 16th Century gear storage, and the ever popular pet, our large dog named Kari. The Captain’s office and eating space is a rectangular marquee where, during the day, we open up one half of the tent and rig the walls to enclose the back half for “backstage” non-period storage, and the front half is the table where the captain holds audience, where his family and honored guests eat meals, and folks can sit down to have longer chats. The Soldier’s tent is a conical where we show off the much lowlier state of the average soldier on the march, though generally the kids end up taking over that tent as their domain (it keeps them out of our hair so us parents are not complaining.) One of our members has a medieval bell wedge that we call the “weibel” tent, or sergeant tent. It stays closed during the day, but we get to point it out as the more reasonable size for an officer and his family than the massive captain’s tent . The “kitchen” where all the food preparation happens, and all the cleanup occurs is not far from the fire, and is under a Sutler Wedge tent that we open up for the daytime, and close down at night. This way we can have all the cooking gear close by, and have open space to talk to visitors and not cook with our backs to the crowds, which we found was a problem before the current set-up. We also have a fly or awning set up where we do brewing demonstrations. That one is between the kitchen tent and the cob oven that we build every year so it also act as spillover coverage on days when the weather makes shelter advisable.

What will we do now that we build all these lovely tents ourselves? I think it is time for movable shelter (i.e. a tent) to cover the area where we display all the weapons during the day, where we can close it up at night without having to shuffle all the spears, swords, arquebus, polearms, daggers, armor, etc. around every time a little dark cloud hovers overhead. If any of our readers have advice on which style would best suit a weapons and armor display area I’d love to hear it!

For the first time in Tentsmiths' history, we're d

Our modern oilcloth is made slightly differently,

With the reenacting and outdoor living history sea

Tentsmiths has been making the highest quality historical canvas tents since 1983. Read More >>

Current orders for canvas tents will take up to 4 months to complete. Smaller items like oilskin tarps are in stock and will ship out the same week. Call for specific schedule. Dismiss